Explore the Sub-Genres and Evolution of Country Music

Country Music has evolved over the decades from a variety of sounds hailing from different areas throughout the United States. Here, we give a brief overview of the evolution of the country music sound.

THE 1920s | RURAL SOUTHERN UNITED STATES - Hillbilly Music is considered the first formal term for Country Music, coined by record producers as a label for Southern music. These songs drew on traditional tunes of folk, ballads and hymns passed down through generations and incorporated the fiddle and banjo as the main instruments.

The first stars include Jimmie Rodgers and The Carter Family, whose songs were first captured on August 1, 1927, in the historical Bristol, Tennessee, recording session. 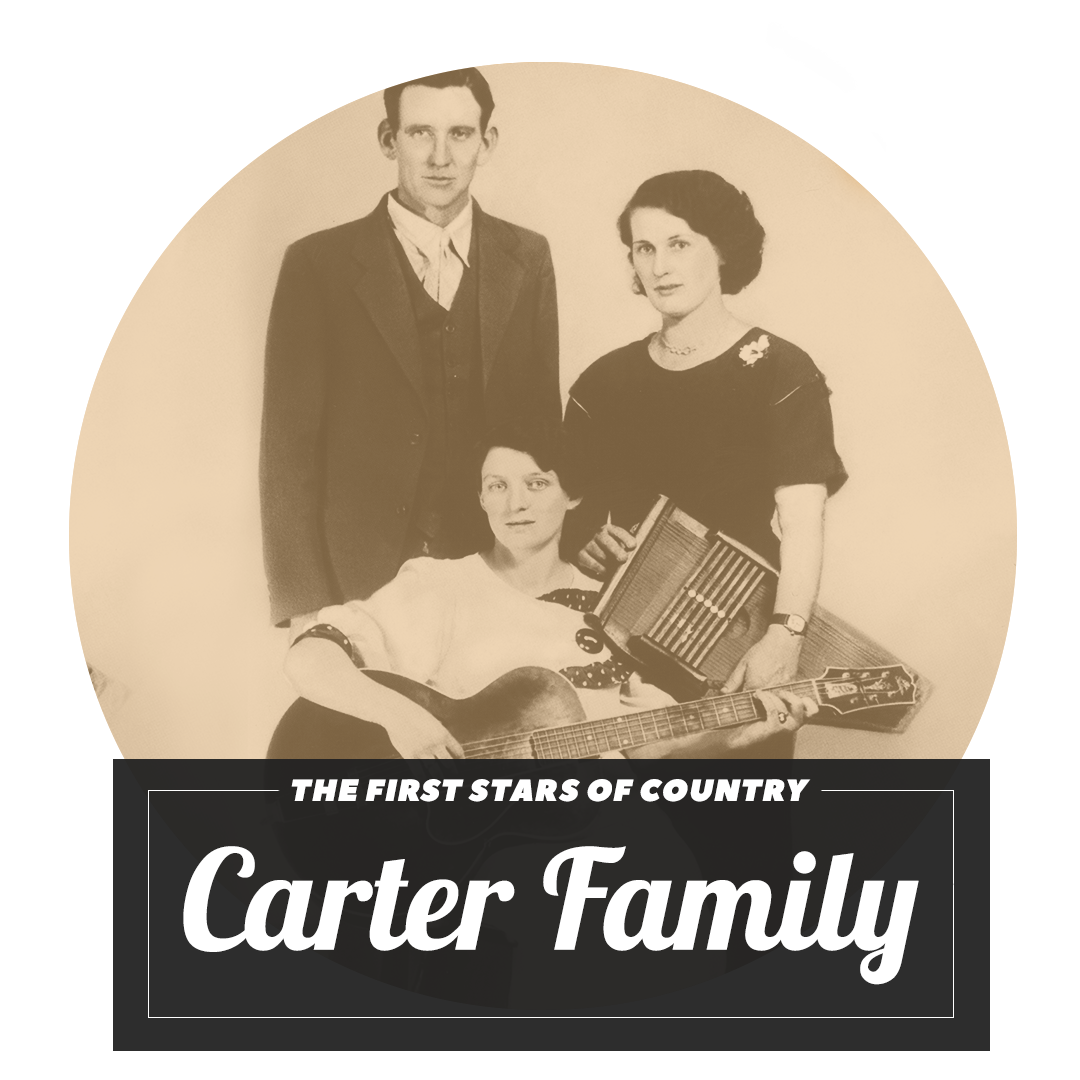 DEVELOPED IN THE 1930s | APPALACHIAN REGION - Bill Monroe described Bluegrass as, "Scottish bagpipes and ole-time fiddlin'. It's Methodist and Holiness and Baptist. It's blues and jazz, and it has a high lonesome sound.”

Bluegrass is derived from a mix of cultures in the Appalachian region of the United States. The English and Scottish settlers brought jigs, reels, and fiddles, while Black musicians of the area introduced the banjo. The sound developed and reached audiences through the radio.

Bill Monroe is considered the father of Bluegrass and his sound helped popularize the genre and grow the Grand Ole Opry. His statue stands outside the Ryman Auditorium in Downtown Nashville. 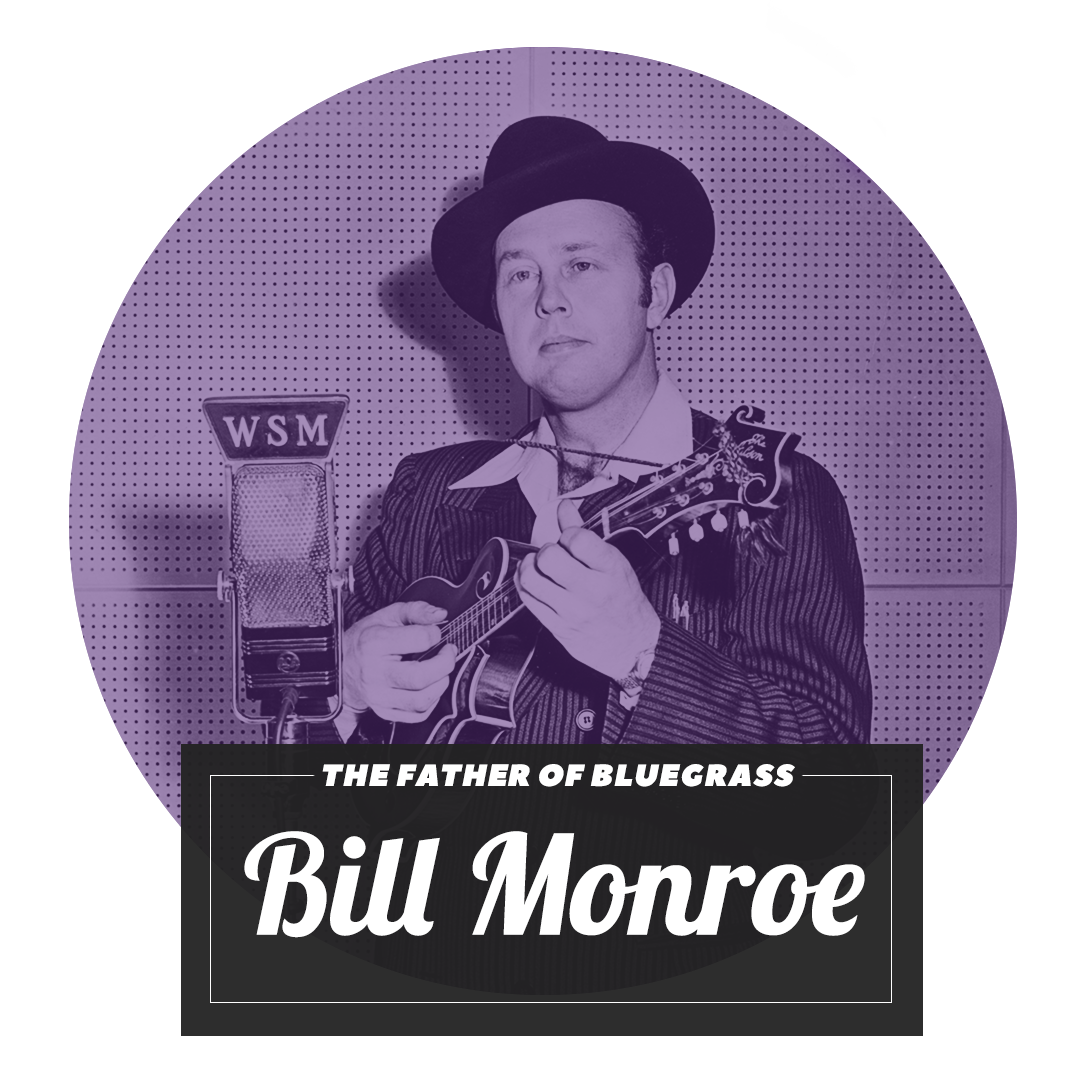 DEVELOPED IN THE 1930 – 40s | ACROSS THE UNITED STATES - With the decline of record sales during the Great Depression, radio became a popular source of free entertainment. “Barn Dance” shows like WSM’s Grand Ole Opry were born featuring musicians like DeFord Bailey and Roy Acuff.

Bob Wills introduced drums to the genre with his band the Texas Playboys. Texas Swing was born as a mix of the horn – driven Big Band music and jazz from New Orleans. 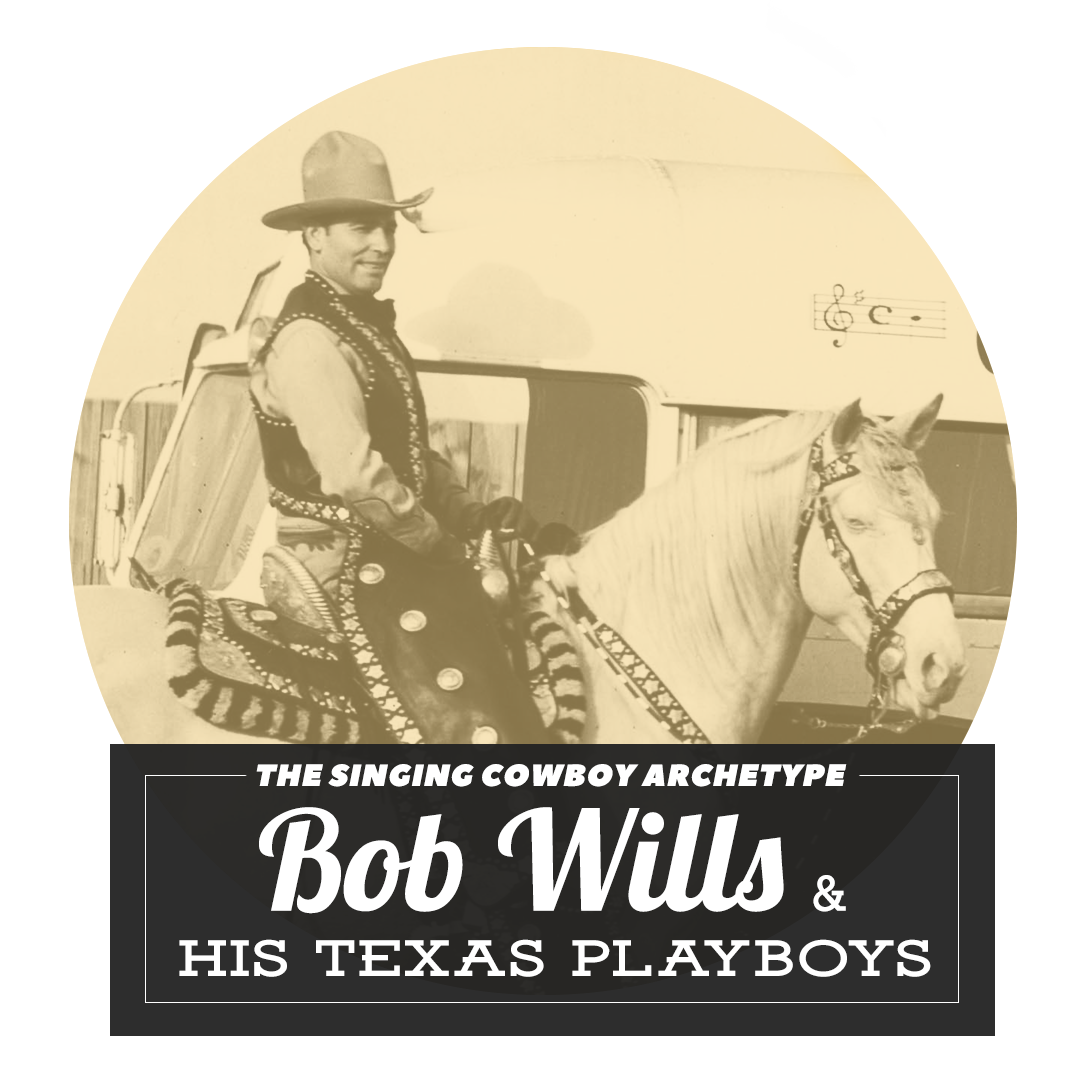 Bob Wills and His Texas Playboys

DEVELOPED IN THE 1940s | SOUTHERN UNITED STATES - This subset of country is perhaps the genre's most popular and well-known sound. Derived from the name of rowdy bars known as "honky tonks" – this music was designed to cut through a loud and boisterous crowd with the band's steel guitar and the singer's piercing vocals.

Ernest Tubb was perhaps the genre's pioneer – he was the first country music artist to bring a steel guitar to the stage of the Grand Ole Opry. But Hank Williams claimed his stake as the "Hillbilly Shakespeare" with his well-known songs. Honky-Tonk remains a definitive sound of country music today. THE 1950s | MEMPHIS, TENNESSEE - Elvis Presley's storied career began when he fused rhythm and blues with a country and western sound - creating Rockabilly. The genre's distinct sound includes twangy guitars and a slapping bass-line. The sound was truly developed by Sun Records in Memphis - the label that also birthed Johnny Cash. Rockabilly branched out from the South and helped popularize rock music for the white audience. 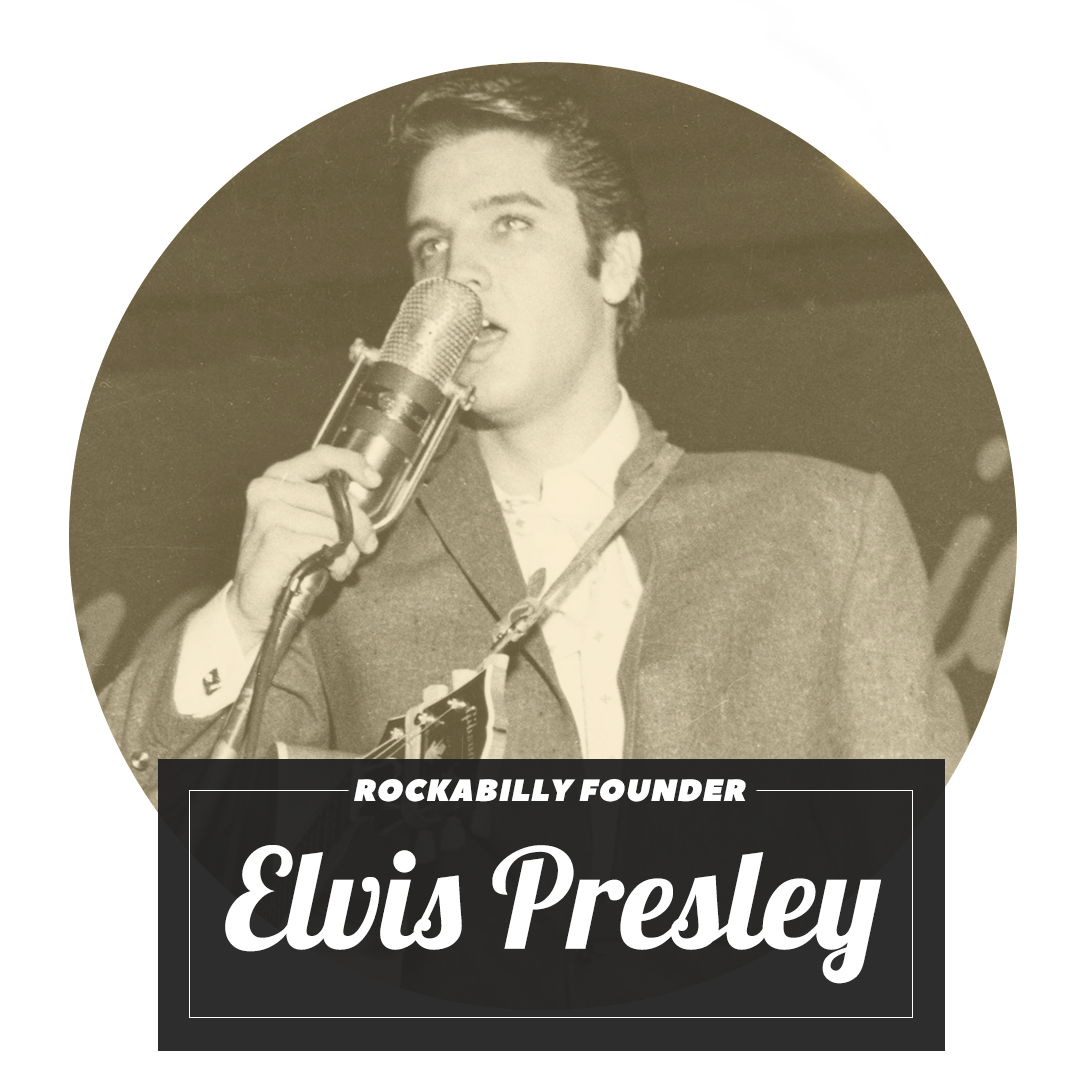 DEVELOPED IN THE 1950s | NASHVILLE, TENNESSEE - The Nashville Sound was a response to the growing popularity of rock music. A change from the honky-tonk sound to a smoother more refined approach took place, changing how country music was produced and heard. Chet Atkins and Owen Bradley pioneered the shift in their Music Row studios. Gone was the twang, replaced with smooth strings and vocals, creating the Nashville Sound. DEVELOPED IN THE 1950s | BAKERSFIELD, CALIFORNIA - The Bakersfield Sound was a stark reaction to the smooth tone of the Nashville Sound. The music coming out of Bakersfield carried a rock influence and a distinct honky-tonk sound, accented with a driving back beat and electric guitars.

Buck Owens & The Buckaroos are a perfect example of the genre. Owens took the production of his sound to extraordinary heights, playing back his recordings on car stereo speakers to make sure the music sounded good on his audience’s AM radios. 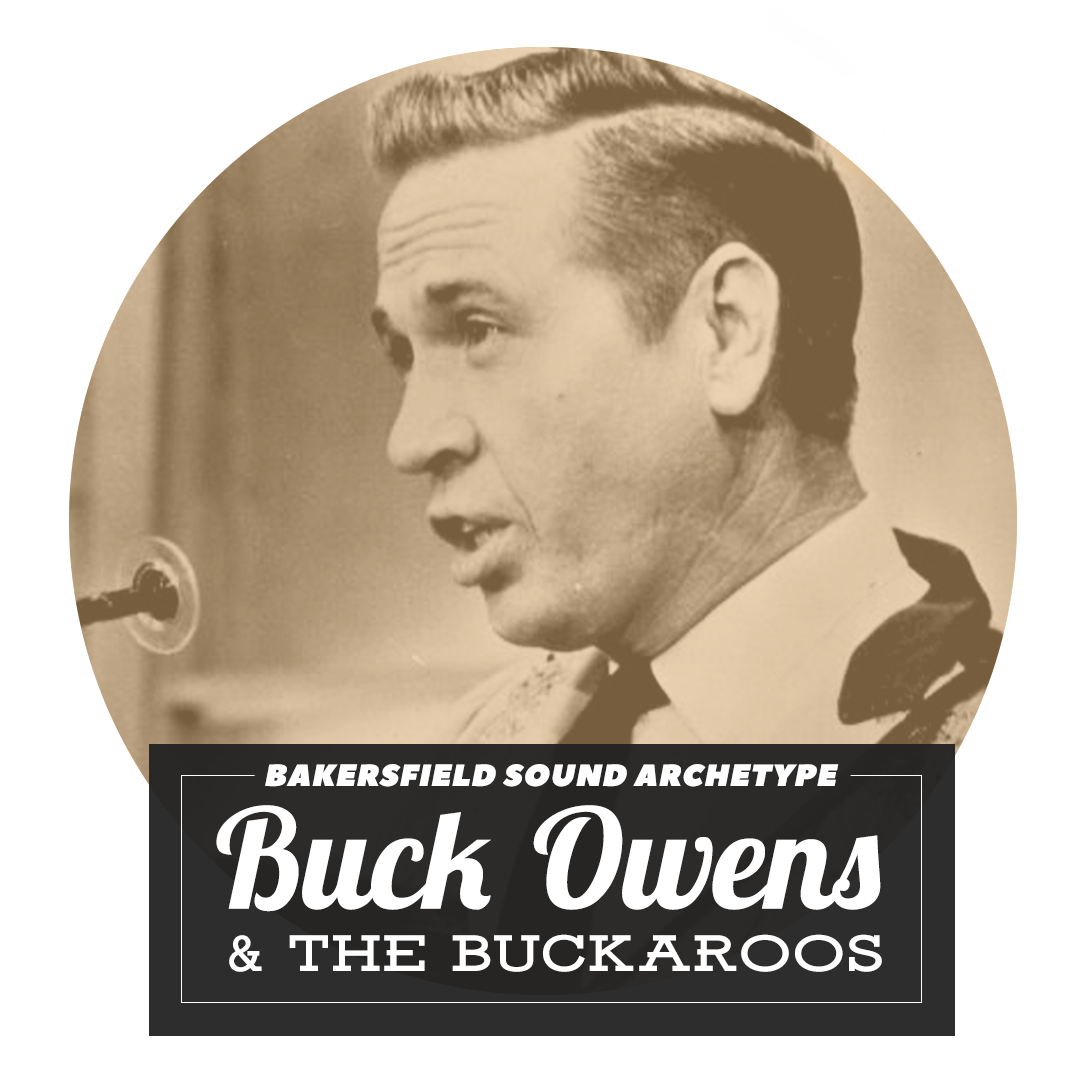 1960s – 70s - Countrypolitan comes on the heals of The Nashville Sound. With the rising popularity of the Bakersfield Sound and the British Invasion, records coming out of Nashville began to develop an even smoother sound with more strings, some background vocals even featured choirs. The new sound appealed to a broader audience.

Charley Pride's tracks during this time period are a great example of the genre. His song, "Is Anybody Goin' to San Antone" opens with smooth up-tempo strings, the verse and chorus of the song are backed by melodic vocals. The lyrics are traditional country. 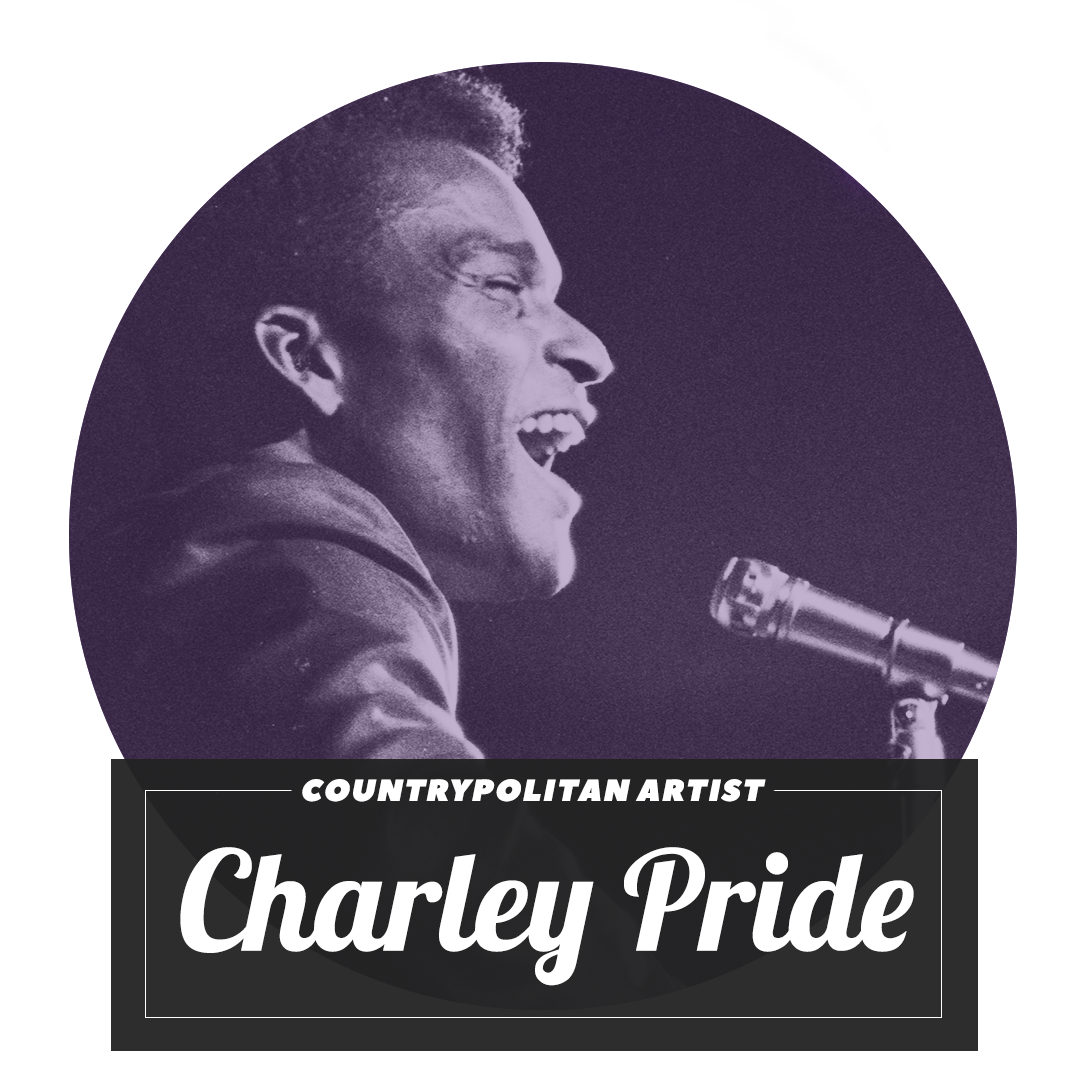 LISTEN TO THE COUNTRYPOLITAN SOUND

1970s - Like The Nashville Sound and Countrypolitan, Country Pop was created to appeal to a larger audience beyond traditional country music. It's origin, however, started with the success of pop artists on the Country charts. Pop music began creeping into the country world, not without backlash. When John Denver, considered a pop artist, was presented with the Country Music Association Award for entertainer of the year in 1975, Charlie Rich read Denver's name from an envelope while simultaneously lighting it on fire.

But, the approach to a sound that appealed to both pop and country fans was too big to ignore. Dolly Parton, an established country star, took advantage of the sound, and branched out into the genre. Many artists found considerable success branching out from traditional country sound. 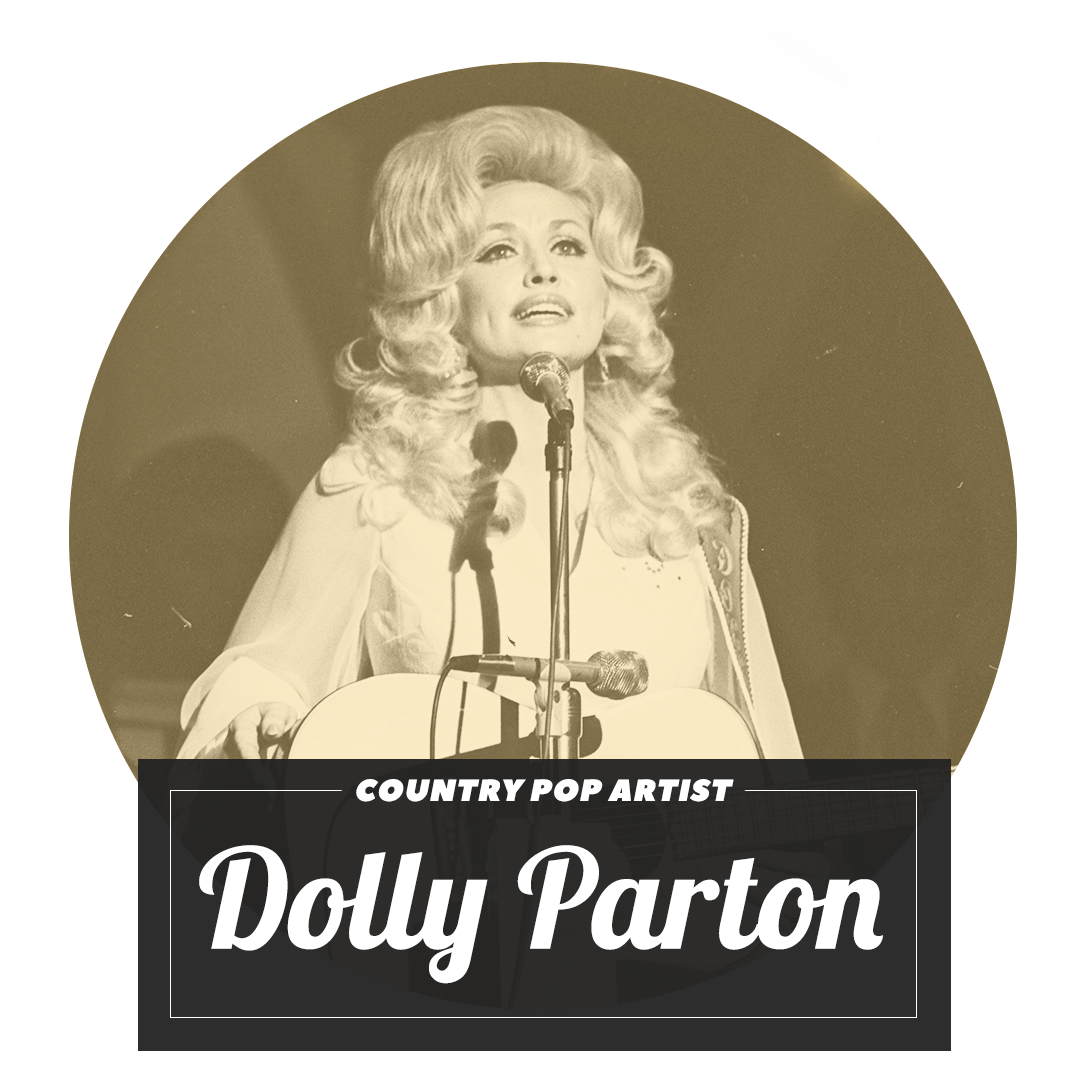 LATE 1960s – 1980s - The Outlaw Movement came about as a response to the smooth- sounding country music coming out of Nashville. Artists like Waylon Jennings and Willie Nelson felt their direction as artists was essentially stifled by Nashville. They gained the ability to produce their own sound, added more of a rock undertone, and returned to more of a stripped-down country sound. HEAR THE OUTLAWS OF COUNTRY

1960s – Present - An umbrella term that encompasses artists who aren't necessarily country, but have certainly dabbled in the sound and have done considerable things for country music. Bob Dylan for instance, recorded Nashville Skyline in Nashville, using Nashville studio musicians. He recorded with Johnny Cash, and was featured on his variety show.

Emmylou Harris and similar artists adopt the sounds and mood of traditional country music, and bring the sound to a wider audience, but remain respected in the country music family. Emmylou Harris and The Nash Ramblers took considerable steps to save the Ryman Auditorium from destruction by recording a live album in the decaying building in 1992. 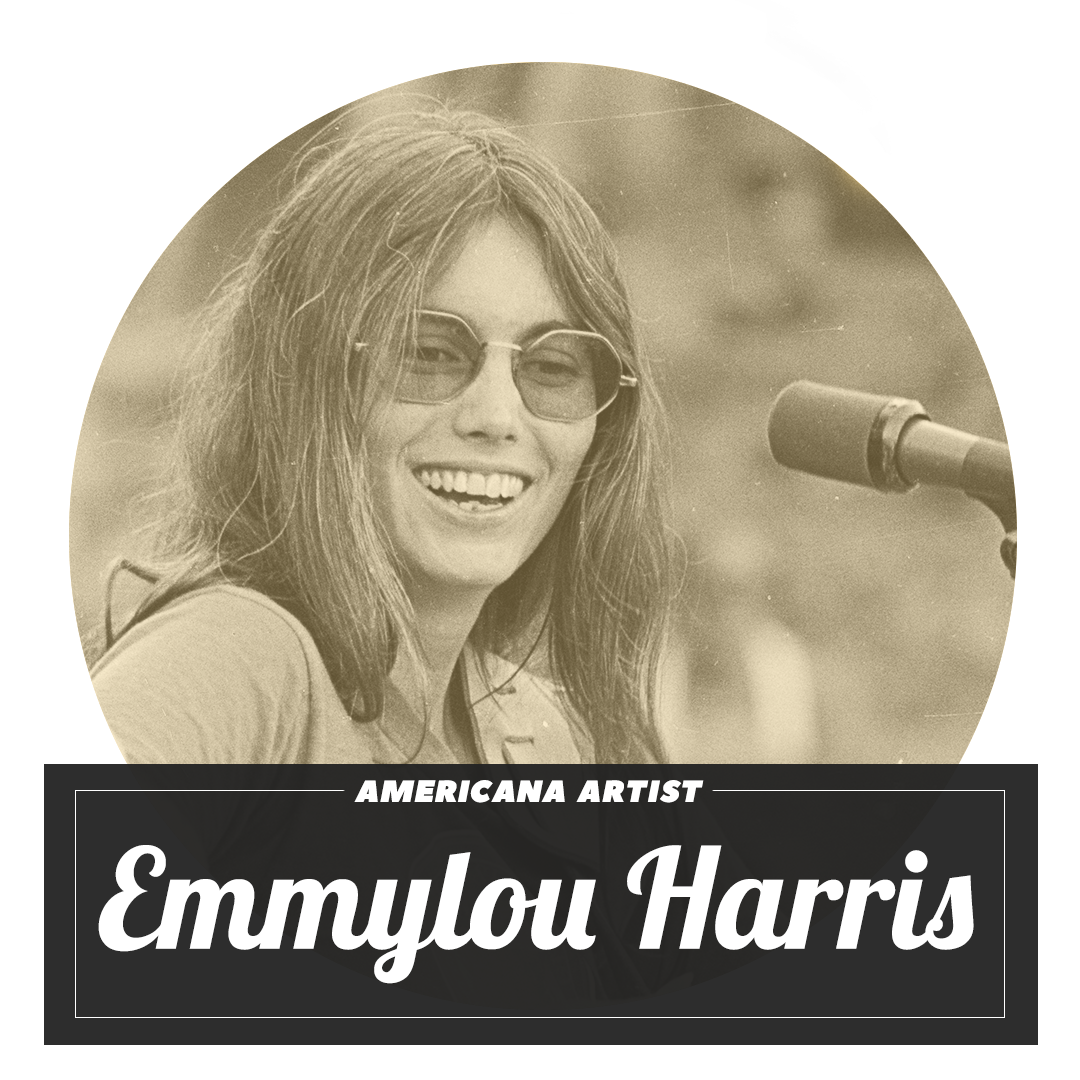 1980s – Present - Neotraditional can define country music today. These artists find their tone and influence from some of the sub-genres mentioned above in order to create entirely new works of art. Some artists incorporate a bluegrass sound, others may incorporate more of a honky-tonk sound.

Neotraditional is like the Outlaw Movement in the sense that it is an attempt to get back to the roots of country — but these artists can have considerable crossover success and appeal to a wider audience. Find out what Ray Charles did for country music. Kathy Mattea on the Echo Chamber at Jack's Tracks 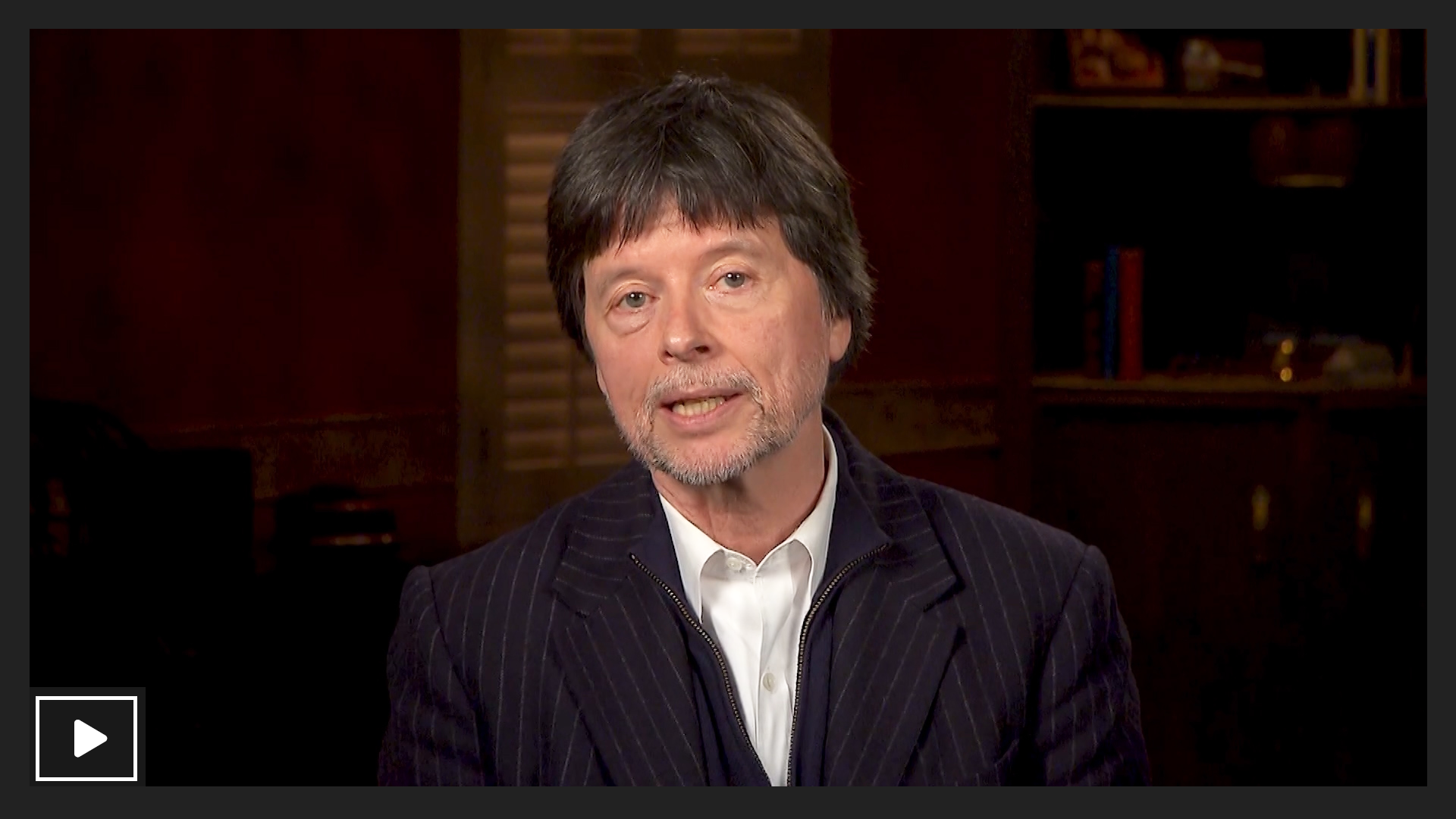 From southern Appalachia’s songs of heartbreak and faith to the western swing of Texas, from California honky tonks to the Grand Ole Opry in NPT's home town of Nashville, Ken Burns' Country Music follows the evolution, over the course of the twentieth century, of America’s music. Country Music is a 2019 film by Ken Burns that documents the history and evolution of a distinct American art form.